Congratulations to the 2016 National Book Award winners: Colson Whitehead, Ibram X. Kendi, & Congressman John Lewis. On this day in Black Literary History (Nov 17th, 2016) we saw three African American men honored, not for their athletic skill or ability to entertain, but for their intellect and prowess with the written word. Understanding the history of this country and that reading and writing was once a criminal act for Africans enslaved in America, we take this day very seriously.

We encourage you all to pick up a copy of 1, 2, or all 3 of these books today from any Black-owned bookstore in celebration of our progress. 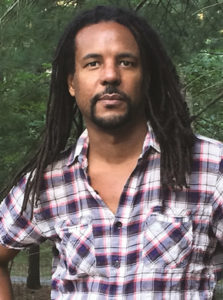 Colson Whitehead: I wrote the book for myself, with the usual hope that if I wrote it well, others might get something out of it, too.

Cora is a slave on a cotton plantation in Georgia. Life is hell for all the slaves, but especially bad for Cora; an outcast even among her fellow Africans, she is coming into womanhood—where even greater pain awaits. When Caesar, a recent arrival from Virginia, tells her about the Underground Railroad, they decide to take a terrifying risk and escape. Matters do not go as planned—Cora kills a young white boy who tries to capture her. Though they manage to find a station and head north, they are being hunted.

In Whitehead’s ingenious conception, the Underground Railroad is no mere metaphor—engineers and conductors operate a secret network of tracks and tunnels beneath the Southern soil. Cora and Caesar’s first stop is South Carolina, in a city that initially seems like a haven. But the city’s placid surface masks an insidious scheme designed for its black denizens. And even worse: Ridgeway, the relentless slave catcher, is close on their heels. Forced to flee again, Cora embarks on a harrowing flight, state by state, seeking true freedom.

Like the protagonist of Gulliver’s Travels, Cora encounters different worlds at each stage of her journey—hers is an odyssey through time as well as space. As Whitehead brilliantly re-creates the unique terrors for black people in the pre–Civil War era, his narrative seamlessly weaves the saga of America from the brutal importation of Africans to the unfulfilled promises of the present day. The Underground Railroad is at once a kinetic adventure tale of one woman’s ferocious will to escape the horrors of bondage and a shattering, powerful meditation on the history we all share.

Colson Whitehead is the New York Times bestselling author of The Noble Hustle, Zone One, Sag Harbor, The Intuitionist, John Henry Days, Apex Hides the Hurt, and one collection of essays, The Colossus of New York. A Pulitzer Prize finalist and a recipient of MacArthur and Guggenheim fellowships, he lives in New York City. 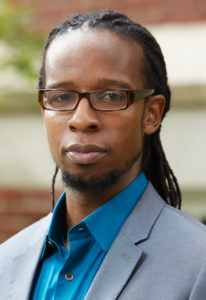 Stamped from the Beginning: The Definitive History of Racist Ideas in America

Ibram X. Kendi: I wrote Stamped from the Beginning for the lives they said don’t matter. From Trayvon Martin to Sandra Bland, all those names, all those lost lives were on my mind as I wrote every word.

In trying to understand why these lives don’t seem to matter, we talk a lot about ignorance and hate. But history tells us something else: that racist ideas were created to defend deeply entrenched and enticing discriminatory policies. And so I wrote Stamped for the generations of Americans who have been convinced by racist ideas into believing there is something wrong with Black people—and not with these policies and racial inequities. I wrote Stamped to give Americans the understanding of history they need to fight for an equitable America where we hold as an ideal that all racial groups are equal.

Some Americans cling desperately to the myth that we are living in a post-racial society, that the election of the first Black president spelled the doom of racism. In fact, racist thought is alive and well in America–more sophisticated and more insidious than ever. And as award-winning historian Ibram X. Kendi argues in Stamped from the Beginning, if we have any hope of grappling with this stark reality, we must first understand how racist ideas were developed, disseminated, and enshrined in American society.

In this deeply researched and fast-moving narrative, Ibram X. Kendi chronicles the entire story of anti-Black racist ideas and their staggering power over the course of American history. Stamped from the Beginning uses the life stories of five major American intellectuals to offer a window into the contentious debates between assimilationists and segregationists and between racists and antiracists. From Puritan minister Cotton Mather to Thomas Jefferson, from fiery abolitionist William Lloyd Garrison to brilliant scholar W.E.B. Du Bois to legendary anti-prison activist Angela Davis, Kendi shows how and why some of our leading proslavery and pro-civil rights thinkers have challenged or helped cement racist ideas in America.

Contrary to popular conceptions, racist ideas did not arise from ignorance or hatred. Instead, they were devised and honed by some of the most brilliant minds of each era. These intellectuals used their brilliance to justify and rationalize deeply entrenched discriminatory policies and the nation’s racial disparities in everything from wealth to health. And while racist ideas are easily produced and easily consumed, they can also be discredited. In shedding much-needed light on the murky history of racist ideas, Stamped from the Beginning offers us the tools we need to expose them–and in the process, gives us reason to hope.

Ibram X. Kendi is currently an assistant professor of African American History at the University of Florida. An intellectual and social movement Africana studies historian, Kendi studies racist and antiracist ideas and movements. He has published essays in books and academic journals, including The Journal of African American History, Journal of Social History, and The Sixties: A Journal of History, Politics and Culture. Kendi is the author of the award-winning book, The Black Campus Movement: Black Students and the Racial Reconstitution of Higher Education, 1965-1972, which was published in March 2012 as part of Palgrave Macmillan’s Contemporary Black History Series. He is currently finishing Black Apple: A Narrative History of Malcolm X and Black Power in New York, 1954-1974. He is also working on another history of racism—the sequel to Stamped from the Beginning. 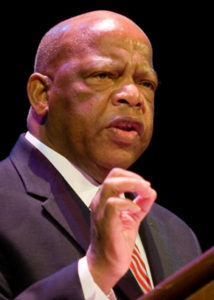 John Lewis: This book is for all of America. It is for all people, but especially young people, to understand the essence of the civil rights movement, to walk through the pages of history to learn about the philosophy and discipline of nonviolence, to be inspired to stand up to speak out and to find a way to get in the way when they see something that is not right, not fair, not just.

Andrew Aydin: March is for everyone who needs a hero. March is for all us struggling to find our power, all of us who are maladjusted to inequality and trying to understand our capacity to make the world around us a better place, And, above all, March is for the young people who need a way out, a way forward, for themselves, for their communities, a way to have lives of great consequence and meaning, lives of service and full of love.

Nate Powell: Our work was in the spirit of illuminating those participants whose contributions have been less celebrated, but as the trilogy progressed it clearly told a story of 2016 as much as it did of 1964, and I found myself increasingly focused on future readers. As my two daughters grow into the world, as their perspectives rapidly expand, March is a road map, providing a real sense of continuity and empathy for those who came before—and how best to move forward. In such a toxic time, I hope this continues to be a part of the antidote for which we’re all hungry.

By the fall of 1963, the Civil Rights Movement has penetrated deep into the American consciousness, and as chairman of the Student Nonviolent Coordinating Committee, John Lewis is guiding the tip of the spear. Through relentless direct action, SNCC continues to force the nation to confront its own blatant injustice, but for every step forward, the danger grows more intense: Jim Crow strikes back through legal tricks, intimidation, violence, and death. The only hope for lasting change is to give voice to the millions of Americans silenced by voter suppression: “One Man, One Vote.”

To carry out their nonviolent revolution, Lewis and an army of young activists launch a series of innovative campaigns, including the Freedom Vote, Mississippi Freedom Summer, and an all-out battle for the soul of the Democratic Party waged live on national television.

With these new struggles come new allies, new opponents, and an unpredictable new president who might be both at once. But fractures within the movement are deepening … even as 25-year-old John Lewis prepares to risk everything in a historic showdown high above the Alabama river, in a town called Selma.

John Lewis co-authored the third volume of the graphic memoir March Trilogy with Andrew Aydin, drawn by Nate Powell. Lewis is Georgia’s Fifth Congressional District Representative and an American icon widely known for his role in the Civil Rights Movement. He is the author of Walking with the Wind: A Memoir of the Movement, published in 1999, which won numerous awards; and Across That Bridge: Life Lessons and a Vision for Change, published in 2012.

Andrew Aydin, an Atlanta native, grew up reading and collecting comic books. After college, upon taking a job with Congressman Lewis, Andrew learned that the civil rights legend had been inspired as a young man by a classic 1950s comic book, Martin Luther King & The Montgomery Story. They discussed the impact that comic books can have on young readers and decided to write a graphic novel together about the civil rights era. A few years later, the March series was born. Today, Andrew serves as Digital Director & Policy Advisor to Congressman Lewis in Washington, D.C.

Nate Powell, called by Booklist magazine “the most prodigiously talented graphic novelist of his generation,” was born in Little Rock, Arkansas. In addition to the March series, his work includes Rick Riordan’s The Lost Hero, You Don’t Say, Any Empire, Swallow Me Whole, The Silence of Our Friends, and The Year of the Beasts. Nate’s work has received copious honors, including the Eisner Award for Best Graphic Novel, a Los Angeles Times Book Prize nomination, and four “Great Graphic Novels for Teens” from the American Library Association. His animated illustrations in Southern Poverty Law Center’s documentary Selma: The Bridge to the Ballot have reached one million students in over 50,000 schools across the nation, and he is currently preparing a new graphic novel, Cover.