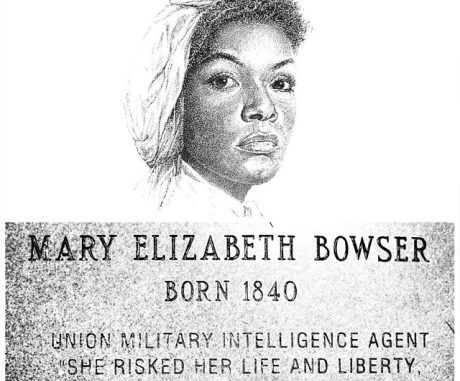 Mary Bowser, birthdate unknown, first appears in history on May 17, 1846. On that day, “Mary Jane, a colored child belonging to Mrs. Van Lew,” was baptized at Saint John’s Church in Richmond, Virginia, according to church records. Elizabeth Van Lew, a white woman who lived in a mansion on Church Hill, was the widow of a wealthy hardware merchant.

Though Mary began life as property, by the time she was baptized, Mary Bowser had been given her freedom and practically adopted by Van Lew’s daughter Elizabeth, a staunch abolitionist and Quaker. Mary was sent north in the late 1840s or the early 1850s by Elizabeth Lew to be educated at a Quaker School for Negroes. In 1855, when Mary was about fifteen, she was headed to New York, from where she would board a ship bound for Liberia, West Africa, a nation founded by Blacks from the United States. After about four years as a missionary, Mary returned to Richmond. This was the winter of 1860, when tensions between the slave states and free states were running high. A year later came the Civil War, and Mary Bowser was soon in the thick of it, helping Elizabeth Van Lew help the Union.

Before the war started, however, she was married to a free black man, William (Wilson) Bowser. Their wedding ceremony was unusual in that they were married in a church whose parishioners were primarily white. The couple settled just outside Richmond, and Mary continued to work in the Van Lew household. The couple never had children. Records also indicate that Mary and William never saw each other during the war. There is also no record of where the couple moved after the Civil War.

After the Civil War broke out, Van Lew expanded her network of pr0-Union spies, who had already been feeding information to the North, tapping Mary Bowser to spy on Jefferson Davis, president of the Confederacy. Because Van Lew knew Davis’s wife, Varina, she easily finessed a way to get Bowser hired in the Confederate Executive Mansion, about a fifteen-minute walk from the Van Lew mansion.

Once in, Bowser played her part–pretending to be an idiot. The politicians, military officers, and other whites who visited the Davises regarded Black people as ignorant, so they didn’t have their guard up when Bowser was around. They spoke freely in the presence of this educated woman, who reportedly had a photographic memory and a total recall of conversations. As Bowser did things like wait tables, polish furniture, and tidy President Davis’s office, she stayed on the lookout for letters, reports–any information the Union could use. Whatever intelligence she gleaned was passed on to Elizabeth Van Lew, which Van Lew then relayed to a member of the Union army.

Bowser sometimes slipped away to the Van Lew mansion to deliver intelligence personally, At other times she sewed dispatches into one of Mrs. Davis’s gowns in need of repair, then dashed to a nearby seamstress also in the spy network. This woman promptly signaled for Elizabeth Van Lew to retrieve the information from the shop. The information Bowser dropped may have ranged from troop movements and supply routes to battle plans and changes in command.

Mary Bowser departed Richmond with Van Lew’s help in early 1865, after she learned that Jefferson Davis was becoming suspicious that there was a spy in his house. Bowser had reason to believe that she was the prime suspect. Her last act as a Union spy and sympathizer was an unsuccessful attempt to burn down the Confederate White House.

After the war, the Federal government destroyed the records of Southern spy activities, to protect their lives – including Bowser and Van Lew. Therefore, details are missing from their stories. Apparently, the Bowser family rarely discussed her work – even among family members – fearing retaliation from lingering Confederate sympathizers.

Bowser’s story was reconstructed from research into Union intelligence operations during the war, and from memoirs of her colleagues in the operation. There is no record of Bowser’s life after the war or her death. It is thought that she returned to the North, possibly to Philadelphia. She left some personal diaries, but unfortunately, her descendants, not recognizing their value, threw them away during the 1950s.

In 1995, 130 years after the Civil War ended, the United States Army finally recognized Mary Elizabeth Bowser’s contribution to the Union war effort by inducting her into the U.S. Army Intelligence Hall of Fame in Fort Huachuca, Arizona.