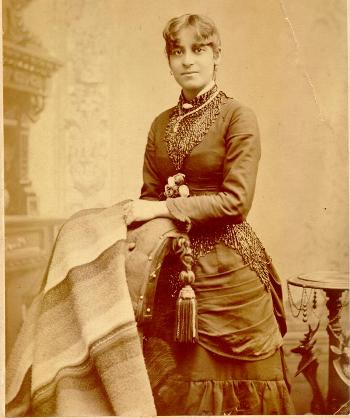 Maggie Lena Walker (1864–1934), was born free as Maggie Lena Draper on July 15, 1864, in Richmond Virginia. Her mother, Elizabeth Draper, was a former slave and the assistant cook for Elizabeth Van Lew, an abolitionist on whose estate Maggie was born. Maggie’s biological father was Eccles Cuthbert, an Irish-American who had met Elizabeth on the Van Lew estate. The two were never married, and shortly after Maggie’s birth, Elizabeth married William Mitchell, the butler of the estate. In 1870, the Mitchells’ had a child, Maggie’s half-brother Johnnie.

Soon thereafter, William obtained a job as the headwaiter at the St. Charles Hotel in Richmond, and the family moved away from the estate and into a small house of their own. Tragedy struck, however, when in 1876 William was found drowned in the river. His death was ruled a suicide by police, though Elizabeth maintained that he had been murdered. William’s death left Elizabeth and her children in poverty. To make ends meet, Elizabeth began a laundry business, with which Maggie assisted by delivering clean laundry to their white patrons. It was during this time that she first developed an awareness of the gap between the quality of life for whites and blacks in the United States—a gap that she would soon devote her life to narrowing.

While completing tasks for her mother’s business, as a twelve-year-old, she also attended elementary school. Maggie continued in this manner for several years until she ultimately graduated from the Richmond Colored Normal School in 1883. While attending the Richmond Colored Normal School, young Maggie, age fourteen, joined the Independent Order of St. Luke, a fraternal organization dedicated to the advancement of African Americans in both financial and social standing. At fifteen, she was secretary of its Good Idea Councill No. 16. At sixteen, she was a delegate to its annual convention in Petersburg, Virginia.

Maggie stepped up her commitment to the order after she became a teacher in 1895 by creating a Juvenile Department. Its mission: to instill in children the importance of education, self-sufficiency, and right living. A few years later in 1899, though the order was facing hard times with falling membership numbers and funds, Walker became its executive director. Maggie began the process of rebuilding the Independent Order of Saint Luke with a massive membership drive, giving speeches in churches, meeting halls, and schools. Then in 1902, Walker launched a weekly newspaper, the Saint Luke Herald, trumpeting news and other information important to the Black community. The newspaper also helped to increase the order’s visibility. Under Walker’s leadership, rolls would rise to more than 100,000 members, with chapters in more than twenty states and Washington DC.

A year earlier in 1901, when there were only about twenty black-owned banks in the United States, Maggie Lena Walker issued a call for another one. At the order’s annual convention, Maggie remarked the following: “Let us put our money together, let us use our money’s; let us put our money out a usury among ourselves, and reap the benefit ourselves. Let us have a bank that will take the nickels and turn then into dollars.” Two years later, on November 2, 1903, the Saint Luke Penny Savings Bank was open for business in Richmond, Virginia. At the helm was Maggie Lena Walker, the first Black woman to run a bank. On the first day of business, the bank had nearly three hundred customers, netting about eight thousand dollars in its vault.

Like the Saint Luke Herald, the Saint Luke Penny Savings Bank created jobs for Black people. So, too, did the Saint Luke Emporium, a department store the order opened in 1905 at 112 Broad Street, now also the bank’s home. The store was not as profitable as hoped and was subsequently closed in 1911. By then the bank was also spun-off as a separate entity, renamed the Saint Luke Bank and Trust Company. Through economic hard times, while thousands of banks were closing after the 1923 stock market crash, Maggie kept hers going by merging with two other Black-owned banks in Richmond. This new bank, the Consolidated Bank and Trust, opened for business on January 2, 1930, and Maggie sat as the bank’s chairman of the board. The bank thrived until 2009.