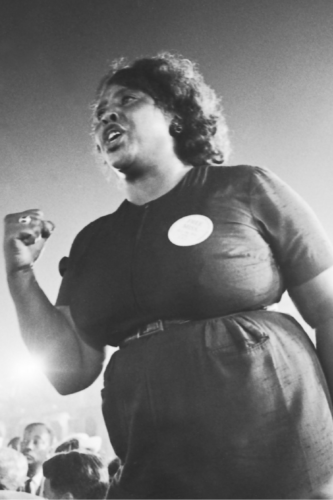 Fannie Lou Townshend (1917-1977) was born into poverty, the youngest of 20 children, to sharecroppers Lou Ella and Jim Townshend in Montgomery County, Mississippi. At age six she joined her family in the cotton fields. At age 12 she was forced to leave school because she could no longer afford to attend.

Fannie continued to be a sharecropper after her 1944 marriage to Perry “Pap” Hamer. The couple worked on a cotton plantation near Ruleville, Mississippi owned by B.D. Marlowe. Hamer also took on the responsibilities of house cleaner and plantation timekeeper because she was the only worker who could read and write. The Hamer’s toiled under terrible conditions for Marlowe until 1962, when tragedy, injustice, and courage led Fannie Lou down a new path.

In 1962, Fannie Lou Hamer underwent surgery to remove a small uterine tumor. She discovered afterward that the surgeon had performed a hysterectomy without her consent. Enraged over this treatment, Hamer attended a meeting that summer to hear civil rights activists James Forman of the Student Non-Violent Coordinating Committee (SNCC) and James Bevel of the Southern Christian Leadership Conference (SCLC). The two men spoke out against those who denied southern African-Americans their legal right to vote. Hamer was inspired. When Bevel and Forman asked for volunteers to register to vote at the Indianola (Mississippi) Courthouse, Hamer was one of 18 to jump at the opportunity.

On August 31, 1962, she traveled with 17 others to the county courthouse in Indianola to accomplish this goal. These courageous men and women marched into the courthouse but were refused the right to register when they failed an unreasonable literacy test. On their way home, the group’s bus was stopped by the police and fined $100 for the “crime” of driving a bus of the “wrong color.” That night, Hamer was forced off the Marlow plantation because she had attempted to register to vote (her husband was required to stay until the harvest), and was shot at 17 times upon being discovered in hiding. These actions only solidified Hamer’s resolve to help other African Americans get the right to vote. According to The New York Times, she said “They kicked me off the plantation, they set me free. It’s the best thing that could happen. Now I can work for my people.”

Hamer dedicated her life to the fight for civil rights, working for the Student Nonviolent Coordinating Committee. During the course of her activist career, Hamer was threatened, arrested, beaten, and shot at. She was severely injured in 1963 in a Winona, Mississippi jail. She and two other activists were taken in by police after attending a training workshop. Hamer was beaten so badly that she suffered permanent kidney damage. In 1964, she announced her candidacy for the Mississippi House of Representatives but was barred from the ballot. In response, the Mississippi Freedom Democratic Party (MFDP), an organization she founded, introduced Freedom Ballots that included all candidates, black and white. Though it was unofficial, Hamer won the Freedom Ballot. A year later, Hamer, Victoria Gray, and Annie Devine became the first black women to stand in the U.S. Congress when they unsuccessfully protested the Mississippi House election of 1964.

Several years later in 1968, still working to improve the life of southern African Americans, Fannie Lou Hammer created Pig Banks, a rural cooperative that provided livestock for poor people in Mississippi. Families were trained to care for pigs, establish cooperatives, and work together to improve the community’s nutrition and health. The following year, Hamer established Freedom Farm with a similar goal of providing food and some economic independence for local people. These projects were critical to the economic development of southern rural communities as well as having a positive impact in terms of education and political empowerment.

In 1976, Hamer was diagnosed with breast cancer. She continued to fight for civil rights, despite her illness. Hamer died on March 14, 1977, in a hospital in Mound Bayou, Mississippi. Hundreds crowded into a Ruleville church to say good-bye to this tireless champion for racial equality. Andrew Young Jr., then a U.S. delegate to the United Nations, gave the eulogy at Hamer’s funeral. He explained, “None of us would be where we are today had she not been here then,” according to The New York Times. Young said that the progress of the Civil Rights Movement had been made through “the sweat and blood” of activists like Hamer. On her tombstone is written one of her most famous quotes: “I am sick and tired of being sick and tired.”