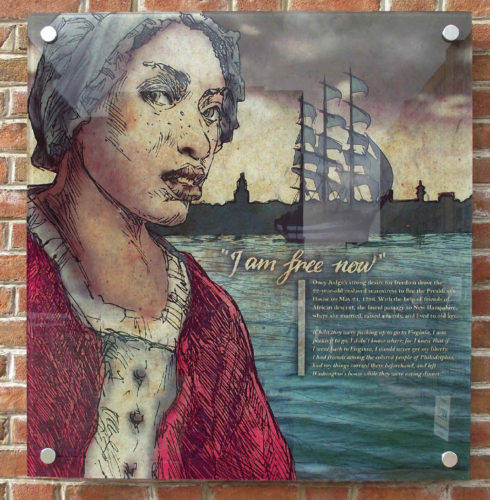 Her mother, Betty, was an enslaved seamstress; her father, Andrew Judge, was an English tailor working as an indentured servant at Mount Vernon. Ona had a half-brother Austin and later a half-sister Delphy. Under the legal principle of partus sequitur ventrem, incorporated into Virginia colonial law in 1662, the legal status of a child was the same as that of the enslaved mother, no matter who the father was. Because Betty was a dower slave, Austin, Ona and Delphy also were dower slaves.

Beginning in 1789, at about age 10, she played with the Washingtons’ granddaughter Nelly at their Mount Vernon plantation. Ona also did chores for the Washingtons such as churning butter, cooking, candlemaking and washing clothes. Her mother taught her to sew, and it was as a seamstress that she was most valued. George Washington called her ‘a perfect Mistress of the needle.’

In 1789, the Washingtons took seven enslaved Africans, including Judge, then 16, to New York City to work in his presidential household. The next year they moved to Philadelphia, where the seat of government had shifted. Martha Washington promoted Ona to personal attendant and gave her light duties: to dress the First Lady for state occasions and accompany her on social calls and shopping trips. They went to the circus together. While Martha socialized with her friends in their homes, Ona socialized with the hostess’s servants.

While moving about Philadelphia, Ona met and made friends with free African-Americans. A Pennsylvania law passed in 1780 gradually abolished slavery, allowing nonresidents to keep their slaves for six months. After that, slaves could free themselves. George and Martha Washington evaded the law by traveling outside of Pennsylvania at least one day every six months. They also rotated their slaves in and out of the states so they wouldn’t establish a six-month residency. Yet Ona yearned for freedom.

As George Washington’s term in office was nearing an end in May of 1796, and the family began preparing to return to Virginia. Ona feared she’d never get her liberty if she went back with them. She also learned the Washingtons planned to give her to their imperious granddaughter, Eliza Custis. As an old woman, Ona recalled, “I wasn’t going to be her slave.”

Ona plotted her escape. With the aid of Philadelphia’s free black community, Judge escaped to freedom in 1796. As she helped the Washingtons pack, she quietly passed her own possessions to her friends. Then one evening while the Washingtons were eating dinner she slipped out of the house and went into hiding.

Judge hid out somewhere in Philadelphia; she never revealed where or for how long. She had to lay low because of an advertisement in the Pennsylvania Gazette giving her physical description and offering a $10 reward for her capture.When she felt safe enough to venture out Ona’s friends walked the docks of Philadelphia until they found a ship captain who would discreetly bring her to freedom. They arranged passage for her with Capt. John Bowles on his sloop the Nancy, which traveled between Philadelphia and Portsmouth, N.H.

Word soon got back to George and Martha Washington that Judge was in Portsmouth. As odd as it may sound to modern ears, the Washingtons were actually stunned and hurt that one of their favorite slaves—“more like [our] child than a servant,” as Washington put it—had escaped. The president was willing to flout the law where his slaves were concerned. Under the terms of the Fugitive Slave Act, which he himself had signed into law in 1793, slave owners were required to go into open court and provide proof of ownership of an escaped slave before crossing into another state to capture them. But Washington wanted to avoid publicity. So he ignored the law and instead sought the aid of government officials, family, and friends to capture Ona.

George Washington died on December 14, 1799; Martha Washington followed in May 1802 and ownership of Ona Judge and her three children now passed to relatives on Martha’s side of the family, but there’s no evidence that they ever tried to reclaim Judge under the Fugitive Slave Act.

Judge didn’t take any chances, though. She laid low for the next 40 years. It wasn’t until she was in her 70s and too old and sick to work—and therefore no longer worth the expense of capturing her and bringing her back to Virginia—that she began telling her story to abolitionist newspapers in the mid-1840s. By then her husband and all three of her children had died, and she had been living in abject poverty for many years. One of the reporters asked her if she ever regretted leaving the Washingtons and Mount Vernon, where, if she had stayed, she might have lived an easier life. “No,” she replied, “I am free and have, I trust, been made a child of God by the means.”