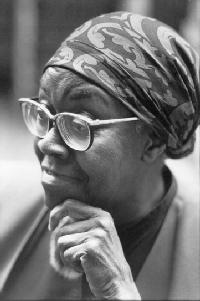 Gwendolyn Elizabeth Brooks was born on June 7, 1917, in Topeka, Kansas. Her father was a janitor who had hoped to become a doctor; her mother was a schoolteacher and classically trained pianist. They were supportive of their daughter’s passion for reading and writing. When Brooks,  known as “Gwendie” to close friends and family during her childhood, was six weeks old her family moved to Chicago as part of the Great Migration.

Gwendolyn was 13 when her first published poem, “Eventide,” appeared in American Childhood; by 16, she had published approximately 75 poems and at 17 she was publishing poems frequently in the Chicago Defender, a newspaper serving Chicago’s black population. As a teen, Brooks attended three high schools: the prestigious, integrated Hyde Park High School; the all-black Wendell Phillips Academy High School; and the integrated Englewood High School. The racial prejudice that she encountered at some of these institutions would shape her understanding of social dynamics in the United States and influence her writing.

In 1936, Brooks graduated from Wilson Junior College, having already begun to write and publish her work. After such formative experiences as attending junior college and working for the National Association for the Advancement of Colored People, she developed her craft in poetry workshops and began writing poems, focusing on urban blacks. She would later say of this time in her life, “I felt that I had to write. Even if I had never been published, I knew that I would go on writing, enjoying it and experiencing the challenge.”

Brooks worked as a secretary to support herself while she developed as a poet. She took part in poetry workshops, including one organized by Inez Cunningham Stark, an affluent woman with a literary background. While Stark was white, all of the participants in her workshop were African American. Brooks made great strides during this period, garnering official recognition. In 1943, her work received an award from the Midwestern Writers’ Conference.

In 1945 Gwendolyn published in her first collection, A Street in Bronzeville. The book was an instant success, leading to a Guggenheim Fellowship and other honors. Brooks once described her style as “folksy narrative,” but she varied her forms, using free verse, sonnets, and other models. Several critics welcomed Brooks as a new voice in poetry. Her second book, Annie Allen, published in 1949, follows the experiences of a black girl as she grows into adulthood, Brooks deals further with social issues, especially the role of women, and experimented with her poetry, with one section of the book being an epic poem, “The Anniad”—a play on The Aeneid. Langston Hughes, in a review of Annie Allen for Voices, remarked that “the people and poems in Gwendolyn Brooks’ book are alive, reaching, and very much of today.” Brooks won the Pulitzer Prize in poetry for her book Annie Allen, making her the first African-American to win the coveted Pulitzer.

In the 1950s Brooks published her first and only novel, Maud Martha, which details a black woman’s life in short vignettes. It is “a story of a woman with doubts about herself and where and how she fits into the world. Maud’s concern is not so much that she is inferior but that she is perceived as being ugly,” wrote Harry B. Shaw in Gwendolyn Brooks. David Littlejohn, writing in Black on White: A Critical Survey of Writing by American Negroes, found Maud Martha “a striking human experiment, as exquisitely written … as any of Gwendolyn Brooks’s poetry in verse. …It is a powerful, beautiful dagger of a book, as generous as it can possibly be. It teaches more, more quickly, more lastingly, than a thousand pages of protest.”

Brooks’s later work took a far more political stance. Just as her first poems reflected the mood of their era, her later works mirrored their age by displaying what National Observer contributor Bruce Cook termed “an intense awareness of the problems of color and justice.” “Though some of her work in the early 1960s had a terse, abbreviated style, her conversion to direct political expression happened rapidly after a gathering of black writers at Fisk University in 1967,” Jacqueline Trescott reported in the Washington Post. Brooks herself noted that the poets there were committed to writing as blacks, about blacks, and for a black audience. If many of her earlier poems had fulfilled this aim, it was not due to conscious intent, she said; but from this time forward, Brooks thought of herself as an African determined not to compromise social comment for the sake of technical proficiency.

Brooks also embarked on a teaching career in the 1960s, working as an instructor of creative writing. She taught at Columbia College in Chicago, Chicago State University, Northeastern Illinois University, Columbia University and the University of Wisconsin. She also continued to write and publish. Her long poem “In the Mecca,” published in 1968, was nominated for a National Book Award in poetry.
Brooks married Henry Lowington Blakely Jr. in 1939. The couple had two children, Henry and Nora. At the age of 83, Gwendolyn died of cancer at her home in Chicago, Illinois. She remained a resident of Chicago’s South Side until her death. She is buried at Lincoln Cemetery in Blue Island, Illinois.