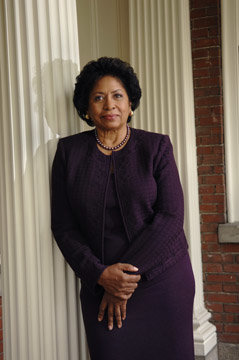 Ruth Simmons (July 3, 1945) became the first African-American president of an Ivy League institution when she was elected as the 18th president of Brown University. The youngest of 12 children born to sharecropper parents in rural Texas, Dr. Simmons was also the first African-American woman to head a major college or university when appointed President of Smith College in 1995, the largest women’s college in the United States.

As a child, Dr. Simmons learned the value of hard work from her mother, who died when she was 15. During times of bitter segregation growing up in the South, those lessons paid dividends, helping her excel at the segregated Houston public school she attended. With the help of scholarships, her family, and high school teachers, Simmons attended Dillard University in New Orleans, Louisiana, a historically black college, in 1967. However, while at Wellesley College, where she spent her junior year, she came to admire President Margaret Clapp, who helped change her notions of gender. “That was defining for me, the notion that women didn’t have to play restricted roles, that you didn’t have to hold back at all,” says Simmons. “The faculty demanded that you work up to your potential.” She later earned a Ph.D. at Harvard in Romance languages.

After serving as an associate dean for the University of Southern California’s graduate school in 1983, Simmons joined Princeton University and served as an administrator there for 10 years. In 1995, she left Princeton to become the president of Smith College, followed by her presidency at Brown University from 2001 to 2012.

At both Smith and Brown, she led vital initiatives to enrich the academic programs at each institution, including launching the first engineering program at a women’s college in the United States.  At Brown, Dr. Simmons successfully obtained more than $1 billion in monetary contributions for scholarships and program enhancements across campus. Additionally, she led an international agenda that sought to increase Brown’s presence on the international stage through programs aimed at advancing transnational scholarly collaborations and addressing global problems.

A notable aspect of Dr. Simmons tenure as president of Brown University was her establishment of a University Steering Committee on Slavery and Justice in 2003. The committee was formed to examine the Brown family contribution to the university was in part based on the slave trade. The steering committee was to make recommendations for how the university might approach the relevant issues. The Report of the Brown University Steering Committee on Slavery and Justice was subsequently published. On February 16, 2007, at an event celebrating the 200-year anniversary of the passage of the Slave Trade Act of 1807 Simmons delivered a lecture at St. John’s College, entitled Hidden in Plain Sight: Slavery and Justice in Rhode Island.

In 2002, Newsweek selected her as a Ms. Woman of the Year, while in 2001, Time named her as America’s best college president. Dr. Simmons was also awarded the 2001 President’s Award from the United Negro College Fund, the 2002 Fulbright Lifetime Achievement Medal, the 2004 Eleanor Roosevelt Val-Kill Medal and the 2010 Ellis Island Medal of Honor. Simmons was appointed in 2009 to the President’s Commission on White House Fellowships by President Barack Obama and has been knighted by the President of France as a chevalier of the French Legion of Honor.