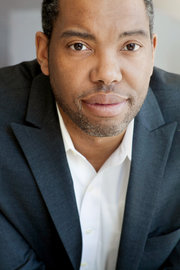 Inspired by James Baldwin’s 1963 classic “The Fire Next Time,” Ta-Nehisi Coates’s new book, “Between the World and Me,” is a searing meditation on what it means to be black in America today. It takes the form of a letter from Mr. Coates to his 14-year-old son, Samori, and speaks of the perils of living in a country where unarmed black men and boys — Michael Brown, Tamir Rice, Eric Garner, Walter L. Scott, Freddie Gray — are dying at the hands of police officers, an America where just last month nine black worshipers were shot and killed in a Charleston, S.C., church by a young white man with apparent links to white supremacist groups online.

Mr. Coates’s expressionistic book is a sequel of sorts and a bookend to “The Beautiful Struggle,” his evocative 2008 memoir of growing up in Baltimore, the son of a Vietnam vet and former Black Panther — as compelling a portrait of a father-son relationship as Martin Amis’s “Experience” or Geoffrey Wolff’s “The Duke of Deception,” and a showcase for Mr. Coates’s emotional reach as a writer and his both lyric and gritty prose.

“Between the World and Me” (which takes its title from a Richard Wright poem) offers an abbreviated portrait of the author’s life at home, focusing mainly on the fear he felt growing up. Fear of the police, who he tells his son “have been endowed with the authority to destroy your body,” and who also possess a dominion of prerogatives that include “friskings, detainings, beatings, and humiliations.” And fear of the streets where members of crews — “young men who’d transmuted their fear into rage” — might “break your jaw, stomp your face, and shoot you down to feel that power, to revel in the might of their own bodies,” where death might “billow up like fog” on an ordinary afternoon.

The “need to be always on guard” was exhausting, “the slow siphoning of essence,” Mr. Coates writes. He “feared not just the violence of this world but the rules designed to protect you from it, the rules that would have you contort your body to address the block, and contort again to be taken seriously by colleagues, and contort again so as not to give police a reason.”

Mr. Coates — a national correspondent for The Atlantic — contrasts this world of the streets with the “other world” of suburbia, “organized around pot roasts, blueberry pies, fireworks, ice cream sundaes, immaculate bathrooms, and small toy trucks that were loosed in wooded backyards with streams and glens.” He associates this clichéd suburban idyll with what he calls “the Dream” — not the American dream of opportunity and a better life for one’s children; not Martin Luther King Jr.’s dream of freedom and equality (which the Reverend King observed was “a dream deeply rooted in the American dream”), but instead, in Mr. Coates’s somewhat confusing use of the term, an exclusionary white dream rooted in a history of subjugation and privilege.

There is a Manichaean tone to some of the passages in this book, and at times, a hazardous tendency to generalize.

After Sept. 11, he writes that he could “see no difference between the officer” who had gunned down his Howard University schoolmate Prince Jones a year earlier — firing 16 shots at the unarmed young man, who was on his way to visit his fiancée — and the police and firefighters who lost their own lives in the terrorist attacks: “They were not human to me. Black, white, or whatever, they were menaces of nature; they were the fire, the comet, the storm, which could — with no justification — shatter my body.”

This startling passage seems meant not to convey a contempt for the first responders on Sept. 11, but to underscore the depth of Mr. Coates’s emotion over the loss of his friend and his anger at police killings of unarmed black men — killings that represent to him larger historical forces at work in American society, in which black men and women were enslaved, their families and bodies broken, and in which terrible inequities continue to exist. Yet it could be easily taken out of context, and it distracts attention from Mr. Coates’s profoundly moving account of Prince Jones’s brief life, and the grief of his mother, a woman who had worked her way up from the “raw poverty of her youth” to become an eminent doctor, trying to provide her children with comfortable — and most of all, safe — lives, which, in Prince’s case, would be cavalierly taken away one night by a police officer later found guilty of negligence and excessive force.

Sometimes Mr. Coates can sound as though he’s ignoring changes that have taken place over the decades, telling his son that “you and I” belong to “that ‘below’ ” in the racial hierarchy of American society: “That was true in 1776. It is true today.” He writes that “the plunder of black life was drilled into this country in its infancy and reinforced across its history, so that plunder has become an heirloom, an intelligence, a sentience, a default setting to which, likely to the end of our days, we must invariably return.”

Such assertions skate over the very real — and still dismally insufficient — progress that has been made. After all, America has twice elected a black president. At other moments in this powerful and passionate book, Mr. Coates acknowledges such changes. In fact, his book often reads like an internal dialogue or debate.

He points out that his son has expectations, hopes — “your dreams, if you will” — that he did not have at his age, and that he, himself, does not know “what it means to grow up with a black president, social networks, omnipresent media, and black women everywhere in their natural hair.”

“The grandness of the world,” he tells Samori, sounding a more optimistic note, “the real world, the whole world, is a known thing for you.”

BETWEEN THE WORLD AND ME

A version of this review appears in print on July 10, 2015, on page C1 of the New York edition with the headline: A Father’s Desperate Dispatch to a Son. Today’s Paper|Subscribe