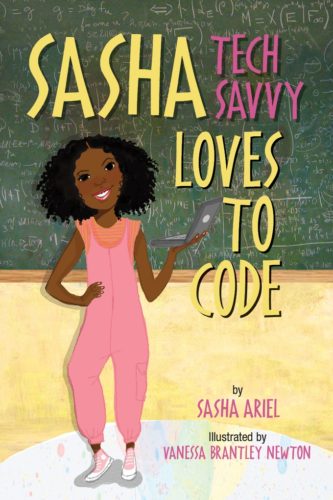 She was first inspired to write the book while in high school after she completed her first internship at Microsoft. Fully immersed in the Technology aspect of STEM (Science, Technology, Engineering, & Math), she was motivated to complete the book even though it took two years.

Sasha says, “I hope my main character, Sasha Tech Savvy, will inspire girls to pursue opportunities in STEM because I see first-hand how underrepresented women and girls are in this area in both college and careers. I recently saw the movie Hidden Figures and I was totally inspired. I don’t want to be an unhidden figure and I don’t want other girls to be either. With enough support and sales, I will be able to donate some books to schools, community centers, and nonprofits that uplift girls.

Autumn Banks, Sasha’s mentor from an internship in the office of the Chief Information Officer at the International Trade Administration, is excited about the book. She shares, “Besides relatable characters with a fun storyline, the book highlights basic coding terms and problem-solving.” Banks adds, “Less than 11% women of color are in STEM careers. I’m not shocked that Sasha would become such a young author discussing such an important topic. She is very professional, intelligent, mature, and sharp.”

Sasha Tech Savvy Loves to Code by Sasha Ariel, is a children’s chapter book (ages 7-10). The main character, Sasha Tech Savvy, is a super smart, 10-year old, African-American girl, who lives in Washington, DC. Sasha must choose which class to take for summer camp. Her mom discovers that the camp is offering a new class for girls on how to code. Sasha thinks this will be boring and doesn’t believe that she is good at computer stuff. Despite this, she decides to give it a chance and convinces her best friends Gabby Reyes and Ashley Webster, to attend the coding camp with her. Sasha’s mom, a Software Developer, gives her a unique formula to help her remember how to code. However, will the formula be enough to get her through a challenging first day of camp with bugs (computing errors) everywhere?

The book is currently available for pre-orders via a Kickstarter campaign that launched on January 15, 2017 at http://kck.st/2iWGP8N. A day after its launch, more than $2000.00 had been pledged by 34 backers. The campaign will end March 1, 2017. For more information and media inquiries, contact Tracy McGhee at goldfernpress@gmail.com or (703) 829-5688. To follow Sasha Ariel online, visit Facebook at www.facebook.com/stemqueen1 and Twitter and Instagram @TheStemQueen.

Sasha Ariel, known as the STEM Queen, is the teen author of the children’s book Sasha Tech Savvy Loves to Code. From Washington, DC, she is currently a college student majoring in Information Systems at Pace University in New York in the Lubin School of Business.

With successful information technology and business internships at Microsoft, Everfi, the U.S. Department of Commerce, Many Mentors, and National Academy Foundation behind her, she is a sought-after speaker to encourage youth, especially girls of color, to pursue educational and career opportunities in STEM (Science, Technology, Engineering, and Math). Sasha was also a Finalist in the Youth Essay Category of the Larry Neal Writers’ Award presented by the DC Commission on the Arts and Humanities and was published in the Harvard Educational Review – Youth Voices. Her LinkedIn profile can be found at: https://www.linkedin.com/in/sashaaalston