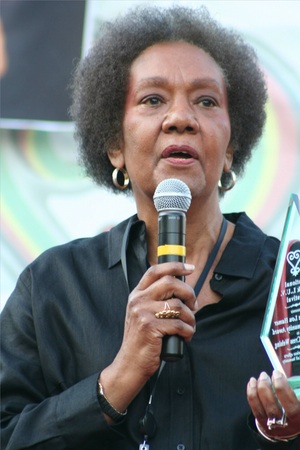 Frances Cress Welsing (born Frances Luella Cress; March 18, 1935 – January 2, 2016) was an American Afrocentrist psychiatrist. The second of three girls, Welsing was born into a family that had already produced two doctors. After receiving her bachelor’s degree from Antioch College in 1957, and her M.D. at Washington D.C.’s Howard University College of Medicine five years later, Welsing pursued a career in general and child psychiatry.

In 1970, her essay The Cress Theory of Color-Confrontation and Racism (White Supremacy) was published while she was an assistant professor of pediatrics at the Howard University College of Medicine. This striking theory of the origins of racism is rooted in the effects that varying degrees of melanin—the color-producing pigment in skin—can have on racial perception and development. “The quality of whiteness is a genetic inadequacy or a relative deficiency or disease based upon the inability to produce the skin pigments of melanin which are responsible for all skin color,” she explained in the essay, adding, “The majority of the world’s people are not so afflicted, suggesting that the state of color is the norm for human beings and [its] absence is abnormal.”

In 1991 she authored The Isis Papers: The Keys to the Colors, a central and core argument for the African origins of civilization through the highlighting of the achievements of African/Egyptian pioneers in the areas of architecture, science, philosophy, and humanism. These origins are often re-colored and re-stated through Eurocentric fabrications, including the fact that some scholars have even dismissed ‘The Papers’ as not having made a direct link between racism and oppression, or even resistance to oppression.

Not surprisingly, Welsing’s views about global white supremacy and racism in contemporary society have provoked controversy and stimulated debate in and outside of the black community. In 1974, Dr. Welsing debated Dr. William Shockley, the author of a theory of black genetic inferiority, on national public television. Her theory challenged former definitions of racism put forth by social and behavioral scientists. Despite the controversy surrounding her, Welsing was praised in the Los Angeles Times for being “the first scientist to psychoanalyze white racism” in the history of Western psychiatry, rather than focusing on the victims of racism.

Ultimately Welsing believed that the key to eradicating racism lies in self-respect, discipline, and education. “We must clean up our neighborhoods,” she told Halliburton. “We must revolutionize ourselves…. Whether white people are consciously or subconsciously aware of it, they are behaving in a manner to ensure white genetic survival. We must know this truth. And the truth is the first step toward real strength.”