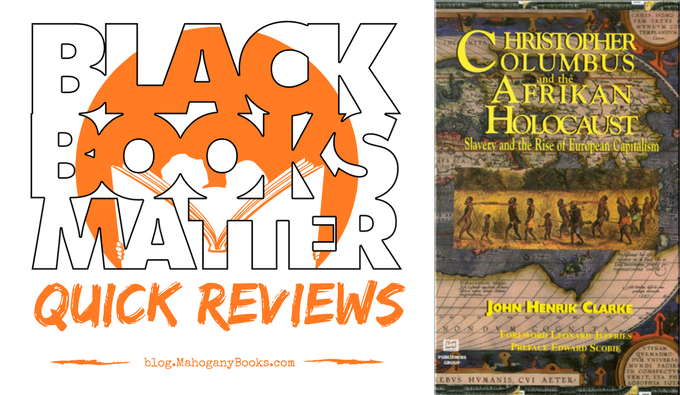 Unfortunately, for most students, the curriculum on pre-colonial Africa and their contributions to world history is extremely poor, if not non-existent. Additionally, the “facts” taught to school age children about the conditions that led to the enslavement of millions of Africans were often written by the captors themselves or the beneficiaries of those captors. So what would happen if a scholar of African descent, undertook the responsibility of explaining who, how, and why Africa was targeted for invasion? The answer to that question, in my opinion, comes in the form of the book, Christopher Columbus and the Afrikan Holocaust by John Henrik Clarke.

Dr. John Henrik Clarke is honored and recognized as a pioneer in Africana Studies. He is often quoted as stating that

“History is not everything, but it is a starting point. History is a clock that people use to tell their political and cultural time of day. It is a compass they use to find themselves on the map of human geography. It tells them where they are, but more importantly, what they must be.”

It’s that kind of wisdom combined with a lifelong devotion to studying and documenting the histories and contributions of African peoples in Africa and the diaspora that has resulted in this book standing out as the perfect example of a “starting point” history book for people seeking to learn more about Africa, pre and post European invasion.

My Quick Impression: ENLIGHTENING! INFORMATIVE! EMPOWERING! EVERYTHING A HISTORY BOOK SHOULD BE. I now understand why Dr. Clarke is mandatory reading for any person of African descent engaging in heritage learning.

What I Most Liked: There are three lasting lessons that I’ve taken away from this book. First, the information within this book hit a huge reset button for me. My understanding of the wide ranging contributions of Africans as innovators, inventors, engineers, philosophers, educators, monarchs, conquerors, and civilization spreaders pre-1500s has provided a new framework from which to view my heritage.

Second, do not be so easily fooled by the attempted erasure of African people from Egpyt, the North African states, Spain, and Portugal just because a historian sought to either rename and/or emphasize one characteristic of a people (i.e. religion) over another.

Lastly, the following quote from Dr. Clarke is, to date, the clearest articulation of MahoganyBooks founding principal as anything we’ve ever written or spoke:

The ultimate purpose of heritage and our heritage teaching is to show our people how, through identity and through respect for themselves, they can work to liberate themselves from the old ties of bondage. — Dr. John Henrik Clarke, Christopher Columbus and the Afrikan Holocaust

Each of these points has acted in concert to energize my continued study of the history of Africa. I’ve never felt as encouraged after reading a history book as I am after reading Dr. Clarke’s book. It’s a feeling everyone should experience as they seek to uncover and recover their heritage.

What I Would Change: Not much….probably not anything. This was my first time reading a history book by Dr. Clarke so the brashness and determination with which he wrote to dispel the myths about Christopher Columbus, pre-colonial Africa, and the African Slave Trade were extremely refreshing. To be sure, as good of a read I found this book to be, I’m quite certain that one must be clear of their end goal when reading this book. Throwing off years of false knowledge can be frightful at times causing some to chafe at the directness by which the facts are laid out in this book.

Pick up your copy today from MahoganyBooks.com
and share your thoughts in the comments section below