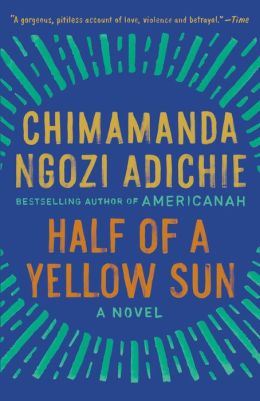 Movies rarely do books justice, and thus I was surprised that the film adaptation of Half of a Yellow Sun captured the nuance that author Chimamanda Ngozi Adichie achieved in her award-winning novel.

The stellar ensemble cast is partially responsible. Wealthy Nigerian twin sisters Olanna (Thandie Newton) and Kainene (Anika Noni Rose) are each involved in romantic relationships that are effected by the political and social unrest underway in Nigeria during the Biafran civil war of the late 1960s. Olanna, the caramel-complexioned and somewhat prissy sister is dating (and eventually marries) a sharp-tongued revolutionary professor by the name of Odenigbo (played by Afro-British actor Chiwetel Ejiofor). Kainene, the chocolate-complexioned sister who’s funny and delightfully acerbic, is dating a white British writer by the name of Richard (Joseph Mawle). Throughout the course of Richard’s time in Nigeria, he begins to identify as a Nigerian and ultimately a Biafran. It’s such an interesting character arc to see this white man come into himself in Africa.

Newton’s and Rose’s on-screen chemistry is palpable. They’re distant, yet synchronized—as is often the norm for sisters. Both Olanna and Kainene are smart as whips, cultured (they were schooled in London), and have an uncomfortable relationship with the wealth they stand to inherit.

“Go back and tell your fellow witches that you did not see my son!” Mama Odenigbo sneers at Olanna during their first encounter. Her pidgin English makes the cut from the verbal lashing all the more deep.

The rift between Odenigbo’s mother and Olanna is just one of the personal conflicts that arises. But at its core, Half of a Yellow Sun is a film about war and its residue. As author Adichie has said, there is ‘Nigeria before’ and ‘Nigeria after’ the Biafran conflict, which saw millions die from famine and fighting. She recalls the impact on her own family and wanted to reflect that in her story, so it is the historical backdrop against which this tale is told. Adichie’s family is Igbo, the well-educated Western-influenced ethnic group who tried to secede from Nigeria to form the independent nation of Biafra. Olanna and Kainene are also Igbo, and their relationships are put to the test during this civil war, as they hopscotch from city to city, village to village, and refugee camp to refugee camp, trying to survive and help their native Igbo people.

With civil unrest looming and anxieties flaring, the movie also shows how relationships are one giant, complicated web. When one is disrupted or weakened, it can drastically alter the well-being of another. While Olanna is out of town, Odenigbo’s mother sends her housegirl into Odenigbo’s bedroom to sleep with him when he is drunk. Olanna finds out, is terribly hurt, and seeks revenge by sleeping with—wait for it, her sister’s boyfriend, Richard.

On the surface, one just might chalk that up to a cruel case of revenge, but a closer examination reveals that here lies a woman who sees her cheating husband and her twin sister as one in the same. Olanna admires both Odenigbo and Kainene for their strength and resolve, yet also envies them because she lacks these traits. As viewers watched that betrayal unfold, I immediately got the sense that Olanna conflates these two individuals perhaps because of their proximity to her heart. To her, Odenigbo and Kainene are one in the same, and that Biyi Bandele, the director, is able to capture that on film, is impressive.

The female characters deliver some of the most piercing lines in the film.

“You must never behave as if your life belongs to a man,” Olanna’s aunt instructed her. I suspect that scene, and its message, seeped into the souls and minds of every woman sitting in the theater. Like the book, the film Half of a Yellow Sun is an African story through and through, and yet there’s something universal and familiar about the way the movie depicts the indigenous people and sounds of rural and urban Nigeria.

The cinematography is eye-candy. The geles (the head scarf worn by Nigerian women), the wrappers and dresses made of colorful African fabrics, the frequency with which Olanna and Kainene switch up their hairstyles: sometimes braids and other times wigs. And also how often they alter their accents, whether talking to local natives, people in high positions, or white Europeans. It reflects the different worlds that they learned to navigate at a young age. Nigerian women were code-switching back in the 1960s.

For his part, Ejiofor gives Odenigbo just enough grit and passion to illustrate why Olanna is attracted to his sense of purpose for himself and Nigeria.

Much of the film depicts Olanna, Odenigbo and their daughter’s time in refugee camps, and the hunger, despair, frustration and anxiety that defined that experience. The evolving relationships between Olanna and Odenigbo, and then Olanna and her sister Kainene, sit at its core.

The film will leave viewers with a solid understanding of Nigerian history, culture and the layers that make the Nigerian people so complex.