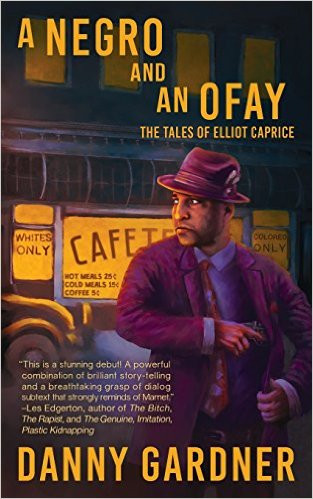 One of the great things about independent presses is that they are often the first to bring new or emerging voices to market. Craig T. McNeely’s Double Life Press is one such indy press, fairly new to the game, and already putting out established authors who I love, such as Will Viharo. Double Life’s newest release, A Negro and an Ofay, by debut author Danny Gardner, is sure to impress with its heavy cultural subtext.

Set in the post-WWII 1950’s midwest, A Negro and an Ofay is, as the tagline reads, “The Tales of Elliot Caprice.” A veteran war hero and ex-cop, Caprice is on the run from his former co-officers after being forced to kill two crooked cops. When Caprice lands himself in a St. Louis jailhouse under an alias, he’s forced to turn for help to the one place all people turn when there’s nowhere left to run: home.

Thus, the book sets off on a winding tale with a cast of characters in Elliot’s hometown of Southville, IL, where Elliot formerly worked as a collector for a local gangster, and quickly finds himself working for the man’s social justice-minded lawyer son instead.

I should probably mention here that Elliot Caprice is mixed-race, African-American and white. Characterized in the book as anything from mulatto to “high yella,” this book is as much about the struggles of a man caught in a world where half black is all black to most whites, and half white is all white to most blacks, as it is a book about solving a set of mysteries.

That’s what I really liked about it.It finds a way to address issues of race and class without getting sidetracked, and, in fact, builds these issues seamlessly into the plot instead. What results is a totally unique detective in Elliot Caprice, who struggles with issues that feel both familiar and totally alien to the genre, not to mention the reader. It’s one of those books that reminds you of how many unheard perspectives there really are on our admittedly racist past (and present, for that matter), and even manages to point racism out in many less obvious ways simply because Elliot’s mixed race status gives him a unique experience with it.

A Negro and an Ofay is not only a fine debut, but a totally new, and important, take on the genre, lest we forget crime fiction’s roots in the 1930s, 40s, and 50s, where our view of African-Americans in crime fiction came almost exclusively from the white perspective, and was often derogatory.

Caprice’s mixed race means that he’s able not just to give us an alternate perspective of racism in our history through crime fiction, but three alternating perspectives: black, white, and mixed. Caprice is at various points in the book taken or identified as each and chooses to blend as each as well. This provides a distinct feeling of how color alters experience throughout, and it gives Elliot a unique ability to let people see what they want to, which he uses to the fullest to navigate his tasks and cases to get the job done.

A Negro and an Ofay is a fine debut by a promising author in Danny Gardner. Plus it has one of the best covers I’ve seen this year, designed by Dyer Wilk. Pick it up, check it out, and go find Danny Gardner online at www.dannygardner.me.