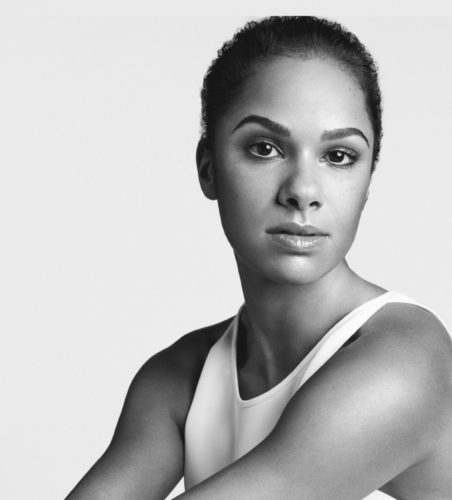 Misty Copeland was born on September 10, 1982 in Kansas City, Missouri. The fourth of six siblings born to Sylvia Delacerna, Copeland’s family moved several times before eventually settling in the coastal community of San Pedro, California. Describing herself as an anxious child stemming from a volatile home life, Misty found comfort both in school and in the world of performance. She developed a love of movement with her first formal encounter with dance coming as a result of joining her middle school drill team. The team’s coach noticed her talent and recommended that she attend ballet classes taught by Cynthia Bradley at the local Boys & Girls Club. Copeland’s natural ability was quickly recognized by Bradley, and, though age 13 was a late start for a serious dance career, Copeland began taking classes with Bradley at the San Pedro Ballet School.

While her dancing life was blossoming, Copeland’s home life was difficult, with Delacerna leaving her husband and the family later moving into a motel. Delacerna and Bradley ultimately decided to allow the 13-year-old dancer to move in with her teacher’s family. In 1998, at age 15, she won first prize in the ballet category of the Los Angeles Music Center Spotlight Awards. That summer she was accepted with a full scholarship into the intensive summer program at the San Francisco Ballet.

After having attended the summer intensive program on scholarship, Copeland’s mother demanded that she return home. With accompanying coverage from local media, a battle ensued between Bradley and Delacerna. Yet Copeland refused to let go of her career. After taking classes at Lauridsen Ballet Centre, she did another summer intensive in 1999, this time at the renowned American Ballet Theatre. She joined ABT’s studio company in September 2000, and then became part of its corps de ballet the following year. During her years in the corps, as the only Black woman in the company, Copeland also felt the burden of her ethnicity in many ways. Recognizing that Copeland’s isolation and self-doubt were standing in the way of her talent, ABT’s artistic director, Kevin McKenzie, asked writer and arts figure Susan Fales-Hill, then vice-chair of ABT’s Board of Directors, to mentor Copeland. Fales-Hill introduced Copeland to Black women trailblazers who encouraged Copeland and helped her to gain perspective.

With the ABT, she went on to perform various acts. Eventually, through her performance, she was listed as ’25 to Watch in 2003’s class of Dance Magazine. She began appearing in Raymond, Pillar of Fire, Swan Lake, and more. In 2007, Misty was made a soloist at ABT. She did exceptionally well as a soloist. Performing a variety of classical and contemporary roles, one of Misty’s most important roles was performing the title role in Firebird, created on her in 2012 with new choreography by much sought after choreographer Alexei Ratmansky.

With a non-traditional entry into ballet, Copeland has created buzz outside of that world due to her being one of the few African-American performers seen in classical dance. In a meteoric rise, she has continually acknowledged the responsibility she feels to brown girls looking to make their way in the art form. Her trailblazing accomplishments have been recognized by a range of institutions, and in spring 2015 she was named one of Time Magazine’s 100 Most Influential People, a rare feat for someone from the dance world.

In June 2015, Copeland became the first African-American woman to dance with ABT in the dual role of Odette and Odile in Pyotry Ilycih Tchaikovsky’s Swan Lake. Then on June 30 of that same year, Copeland scored a monumental achievement covered the world over, becoming the first African-American performer to be appointed an ABT principal dancer in the company’s 75-year history. At a subsequent news conference, an emotional Copeland stated in tears that the announcement marked the culmination of her lifelong dream.

Copeland has also been able to forge a career outside of the classic traditions of ballet garnering numerous endorsements from the likes of Under Armour, COACH, and many others. The ballerina has also become a tour de force in the literary world, publishing two works in 2014: New York Times best-selling memoir Life in Motion: An Unlikely Ballerina, with journalist Charisse Jones as co-writer, and the award-winning children’s picture book Firebird, with art by Christopher Myers. In 2017, she published a health and body wellness book, entitled Ballerina Body.

In May 2016, Copeland inspired a Barbie doll wearing a costume reminiscent of the one she wore in Firebird. The doll is part of Barbie’s Sheroes program which honors female heroes who break boundaries.