I remember the news reports in February of 2020, telling of countries around the world that were experiencing infections and fatalities from the Coronavirus.  On March 13, 2020, the virus was officially declared a national emergency in the United States. I remember the heightened interest in the health crisis now that it was on U.S. soil.  How American of me to be less gripped by an emergency when it was merely international, and not considered ourproblem. In a matter of weeks, the U.S. infection rate began to grow, and quickly. I read a report that warned of particular dangers for individuals who are 70 years of age and older with pre-existing conditions.  My delayed interest in the pandemic was now a mild panic, as my father fit that haunting description precisely. How human of me to be less gripped by an emergency until it is figuratively on my block, with my own family at high risk. How different this world would be if we all viewed each other as family.

My regular check-in calls with my father picked up. I was now consumed with making sure he was okay and out of the way of this monstrous virus at all times. The days, weeks, and months rolled by, each with my father in good health and happiness. I’d gotten so used to hearing his regular, jovial tone on the other end of the phone that at some point, I’d forgotten that he was still at high risk. My panic dissipated over those months, and when December hit, I felt a sense of relief that my family had made it to the end of the year without being deeply impacted by the pandemic. Then it happened; n one of my check-in calls, I noticed my dad’s tone wasn’t as cheerful as it usually was. He shared that he wasn’t feeling well and was going to take some medicine soon. He mentioned a heavy cough and slightly labored breathing. A day or so passed and my mother called to tell me she was taking him to the hospital, where he would later be diagnosed with pneumonia and then COVID-19. He spent just under a week in the hospital before he passed away. The phone call where I learned that he did not survive still haunts me; the pain in my mother’s voice is a sound I’ll likely never forget. 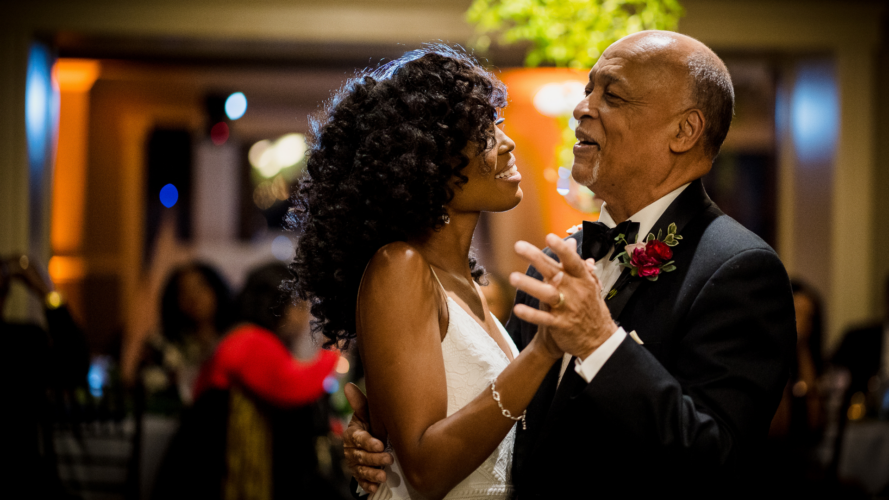 It was a total upending of normalcy in my life —an interruption of all order in my world. You’re supposed to watch your parents grow old, orat least that’s the story my 93-year-old grandparents’ lives tell.

I was on the program to speak at his funeral. I’d hoped the right words would come to me in the days, hours, or minutes leading up to his service, but they never did. My eyes, blurry with tears, followed the names on the program as each speaker took their place in front of his casket and shared their fondest memories, but still nothing came to me.  It was as if reviewing memories in my mind cemented the reality that there would be no new ones, and that was too painful to bear somy heart refused.

I’d heard a lot about grief before experiencing it firsthand. I figured losing a loved one was difficult, and I’d imagined that one day I’d miss my father when he was gone.  But what I was completely unprepared for, was how much I’d miss the way he loved me. Maybe it sounds too selfish to say out loud, but as a daddy’s girl that could do no wrong in her father’s eyes, amidst such a cruel and unforgiving world, losing such an unconditional, familial love left an indescribable void. It’s a loss I feel every day.

“I’m sorry for your loss” is the common sentiment expressed by others when a loved one passes, but no one ever talks about what you might gain.

I think of the character Bynum in August Wilson’s Joe Turner’s Come and Gone. Bynum is a resident at Seth and Bertha’s boarding home in Pittsburgh. He is looking for a “shiny man” he met one day while walking on a road in Johnston. The man told Bynum to follow him because he had something to show him, and that a voice inside him was leading the way. It said if he followed, he’d show Bynum the “Secret to Life.” Bynum followed the stranger to a bend in the road, where they stopped.  The stranger told Bynum to hold out his hands, and when he did, he smeared blood on them and told him to rub it all over himself as a way of cleansing. After complying, Bynum noticed that their scenery changed, and everything around them looked larger than life.  He turned and noticed that the stranger had blinding light coming out of him, then he vanished.

Bynum then roams around, looking for his way out of this strange place and to his alarm, he discovers the spirit of his deceased father standing before him. He called for Bynum and told him he’d been thinking about him and had been grieved that Bynum was carrying other people’s songs, and not having one of his own. “He told me he was going to show me how to find my song,” Bynum said, and he did.  His father led him to an ocean and showed him something Bynum says he had no words for.  His father told him that there are many “shiny men” who go before us and show us the way.  “And if he ever saw one again, [he] would know that [his] song had been accepted and worked its full power in the world, and he could lay down and die a happy man.  A man who’d left his mark on life.”

Losing family makes family take on new meaning. I never realized how intertwined our lives are until my father transitioned.  Every fiber of my being was impacted by his life and even more by his loss. Every aspect of my existence was altered. In an instant, I was a different wife, daughter, sister, friend. The person I was before December 22, 2020, is a mere memory.

I lost so much on that day, but like Bynum on that road in Johnston, I gained a lot too. Through my father’s death I, too, gained a new song. It is still being composed  lines are still unwritten, but I hope it is filled with chords of compassion and grace, as my father’s were.   Though the weight of grief is too heavy to bear most days, I am altogether lighter— less attached to the things of this world. My song is brief, as I am more aware of the transience of this life, and how fleeting our days are.

I hope I allow my life’s low moments to create a harmony with the highs as my father did.  At times my song will be a hymn as I lift up my joys and sorrows to God as my daddy taught me to do.

My melody is one of empathy, as I now know the pain of death that so many before me have felt and so many after me will. My song is in unison with the 2.6 million other families around the world who mourn the impact of this deadly disease.

I am remembering my father as a man who honored God, cherished his wife and loved his children. If my father can hear and see my life, I just hope he’s enjoying the song.

Joya Matthews is an energetic communicator and writer in Washington, DC. She has a Bachelor of Arts in Journalism and Public Relations, and a Master of Public Administration from the University of Memphis. She is currently the Associate Director for the Mayor’s Office on Women’s Policy and Initiatives where she connects District women to resources and opportunities designed for them. She is a writer for ESPN’s The Undefeated, where she regularly produces original stories on race, sports and culture. As a past local television host of “Another Perspective,” she is adept at communicating with various audiences and relaying appropriate and specialized messaging.

Divine Only and Difficult Always

Laughing Through The Pain